When comparing the Pro and Elite versions of Nike's popular Mercurial Football Boots, let's start with the biggest difference - the price.

Wow. For two boots that look almost identical, that is a huge price gap! Let’s take a look at why the Mercurial Vapor 14 and Superfly 8 Pro Editions are some of the most slept on cleats in the game right now.  The Mercurial franchise has been at the top of it’s class in the speed cleat game for well over a decade with superstar athletes like Cristiano Ronaldo and Kylian Mbappe lighting up stadiums in the Flagship Elite Editions of the cleats.   But if you’re not signed to a multimillion dollar brand deal like those two and aren't able to spend big on the latest Mercurial Vapor or Superfly Elite at their premium price points there is another option.

The Pro versions of the Mercurial line are visually almost identical and feature a lot of the same technology found on the Elite editions as well. The crucial difference for many will be the (over $110.00) price drop!  We’ve worn both models in different playing conditions and want to share with you the differences and similarities between these two versions that you might not be able to pick up on just by looking at the images of the cleat side by side. 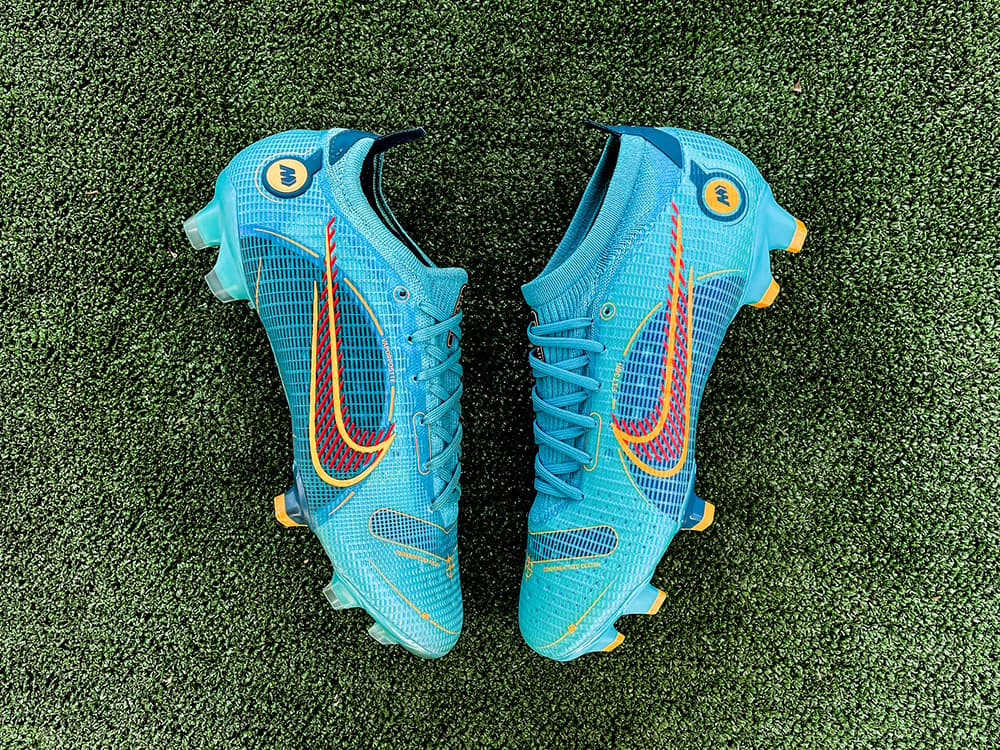 Both the Pro and Elite models are built around the same last which means that the overall shape of these cleats are exactly the same. Both are suited to a narrower foot shape and feature a high arch on the instep of the cleat. The overall construction on both versions is designed to lock your foot in place for an ultra responsive performance.

Flyknit: Both versions also incorporate the elasticated Flyknit material that runs up the lacing area and around the ankle of the wearer. Here the main difference is visual. On the Elite model you get a more sculpted contour around the ankle whereas the Pro cut is more linear. While the knit is slightly more premium, refined and form hugging on the Elite version, once they are on foot the differences in fit and feel of both versions of the Flyknit are almost imperceptible.

Vaporposite is the new synthetic upper textile found on the Elite model and is extremely thin and lightweight. The Pro version features a slightly thicker and less supple upper material but is still built with the same 360 degree construction, meaning that the upper wraps the entire foot without any visible seams. Again this material difference is very minimal and the upper on the Pro version has all of the characteristics of a premium level speed cleat.

ACC Technology:  ACC (All Conditions Control) Technology is something that is designed to provide additional tactility in both wet and dry conditions and is featured only on the Elite versions of the Mercurial. In our experience wearing both versions the tactility and touch on the ball is slightly more pronounced on the Elite model however, neither cleat is especially noted for its tactility.

The soleplate on the Pro is not the anatomical one that you’ll find on the Elite which connects to the foam insole insert via an organic lattice patterning through the midfoot. Instead the Pro offers a more traditional and slightly stiffer execution which doesn't quite provide that same snapback and means that your foot is sitting slightly higher off the ground than it would in the Elite model.

While the finish and coloring is slightly different on the underside of the shoe, the outsole construction, stud shape and configuration are exactly the same on both models. In terms of traction performance you are getting the same elements on the Pro version as you would on the Elite.

There is a slight weight difference between the Pro and Elite variations but it’s so small that you're unable to notice both in hand and when the cleats are on foot. While the Mercurial Vapor 14 Elite tips the scales at only 7.2oz,  the Pro model weighs in at around 7.3oz with the slightly less premium material and construction methods used in the making of the cleats contributing to the miniscule 0.10oz weight increase.

Overall the Pro version of the Mercurial 14 and Superfly 8 are some of the closest replicas to the Elite versions that Nike have ever released and feature some amazing technology for the price point.  Now that you know more about the differences and similarities between the Pro and Elite versions of the Nike Mercurial franchise, which are you likely to choose as your next pair?

Be the first to know about new collections and exclusive offers.